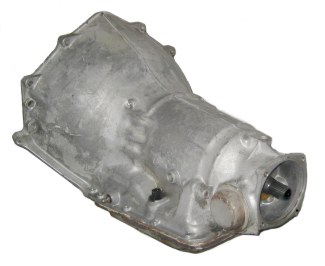 The TH350 is an automatic shift, three-speed transmission. It is widely considered to be one of the greatest of automatic transmissions ever built.

The TH350 transmission was introduced in the 1969 model year as the successor to the GM Powerglide automatic transmission. Jointly developed by Chevy and Buick, it is also referred to as the CBC (Chevrolet-Buick Combined) 350. The Turbo 350 quickly become known for its strength, versatility and compactness.

The HydraMatic 350 transmission was prevalent in nearly all GM, rear-wheel-drive cars and trucks through 1984. It was typically paired with Small Block V6 & V8 engines. It was phased out of use and superceded by GM's 700R4 starting in 1982.

The Turbo 350 is the shortest and one of the strongest automatics that can be put into a Jeep.

The 350 transmission is 21-3/4" long and its one-piece case is cast of aluminum alloy. It features an integral bellhousing. The TH350 weighs 120 lbs. It has a distinctive oil pan that is chamfered at the passenger side, rear corner. At the right rear of the case is the modulator.

The TH350-C was the lockup torque converter version introduced in the late 1979 model year, and was produced through 1984. This later version had an electronic lock-up converter to increase fuel-efficiency at cruising speeds. The TH350-C lockup version can be identified by an electrical plug on the left side of the transmission. When paired with an aftermarket TCC control unit, these can be desirable transmissions, and up to 10% more efficient at cruising speeds.

The two-wheel-drive TH350 works very well when converted for use with a Jeep transfer case.
Image courtesy of Raptor.

The HydraMatic 350 may vary in clutch pack and band specifications. As a general rule, transmissions found behind larger engines will have stronger specs. If your Turbo 350 came from behind a lighter duty motor, don’t worry. These transmission can be affordably rebuilt with stronger components in nearly every area. Additionally, shift improver kits are available to provide firmer, quicker shifts, reducing slippage, heat and clutch wear. There are also many styles of torque converter to better configure the transmission for optimal use in the particular vehicle's circumstances. 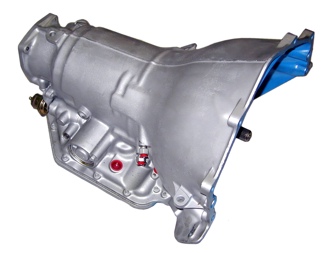 A turn-key TH350, professionally built, OEM style or adapted and delivered to your door - ready for a variety of engines and Jeep transfer cases. Read more...

This transmission makes an excellent conversion transmission due to its adaptability into most Jeeps. Both 2wd and 4wd versions of the 350 can be used equally well, and there are no inherent advantages to either one once you have installed our adapter assembly.

2wd transmissions feature conical shaped tailhousings and an output yoke, which are replaced with a typically shorter 4wd style output shaft (most often included with our adapter assemblies) of varying lengths and spline counts, depending on the application. The HydraMatic can be adapted to the popular Jeep (and many IH) transfer cases, including the: 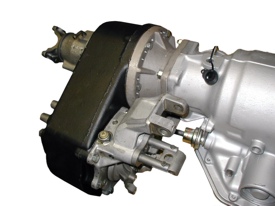 The front face TH350 is natively compatible with either the Chevrolet 90 degree “Small Block” & “Big Block” patterned engines, including the V6, V8, I6 & Iron Duke I4. Another version, the Buick / Oldsmobile / Pontiac (BOP) TH350 will be compatible with the Buick 90 degree V6 & V8 engines, and the Olds & Pontiac 90 degree V8. This “BOP” version features a “valley” at the twelve o’clock position of the block flange where the peak would be on the Chevy (pictured) version. 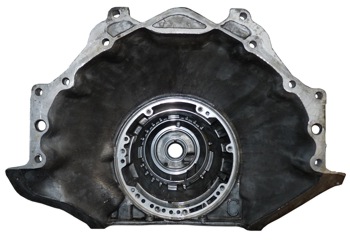 The top dog of cool TH350 transmissions is the TH350C Unicase version, featuring both a Chevy / BOP pattern and a lockup torque converter. Note the letter "C" cast into its front face adjacent to the pump bore.

These differences only affect the front bell of the case, and all TH350 cases are similar from that point back. Note that there are dual-pattern “uni-cases” compatible with both the Chevy and BOP style engine blocks.

The TH350 can be made compatible with a variety of AMC I6 & V8 engines. See our Kit #437AMC for details. This kit can help make for a good Jeep powertrain.

Ron Sessions' book, Turbo Hydra-Matic 350 Handbook, ISBN 0-89586-051-1, is a great read and will bring the reader a level of detail on the history, rebuilding and improvements one can make to these great gearboxes.