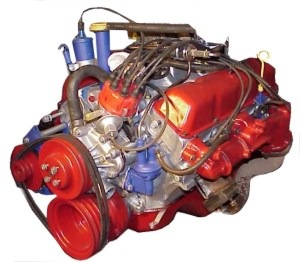 AMC V8's have always been well-liked engines. AMC made a good automobile, and though they may not have enjoyed the mainstream sales and success of the "Big Three" automakers, their cars and engines remain cult classics of sorts today. It's been said that some of America's best engineering talents worked for AMC, and there was always a strong culture of performance within that company.

The AMC V8 as known by Jeep enthusiasts was first introduced in 1966. Though AMC did have a V8 prior to this, they were large block motors, and though capable of great power, they were less suitable for a market that had been increasingly dominated by the innovative Chevy V8 and Mopar V8 Small Blocks (since 1955) and the Ford Windsor V8 (since 1963). This new AMC engine defied categorization to a degree in that it was more of a "Mid Block" engine instead of having either a small or big block design. All displacements shared the same iron blocks, though heads (also iron) varied. They featured hydraulic lifters, overhead valves, a front-mounted distributor and a variety of carburetors and intakes. The first displacements from 1966 to 1969 were 290, 343 and 390. 1970 saw the introduction of the 304, 360, and 401 engines, each released with revised heads for better breathing.

Of note here: the Rambler & AMC 250, 287, 327 engines were of a different family and did not share the same bellhousing bolt pattern, nor other known interchangeable components.

The idea of putting a V8 into a Jeep was not a new one by this time. Enthusiasts and the aftermarket (with Novak being at the forefront) had made a cottage industry of installing Chevrolet V8's into Jeeps. In production terms, Buick V6 & V8 engines had pushed Kaiser Jeep into the muscle era in the mid-60's, and AMC picked up on this immediately when they purchased the Jeep line from Kaiser in 1970. The 1971 "J" Series was the first to receive an AMC engine (the 304), replacing the very capable and benchmark Buick Small Block V8. They began to phase their engines into all Jeep models in the following two years. 1972 was the first CJ to see the V8, AMC having lengthened the CJ's front clip to accept the longer I6 and V8 offerings.

>Keeping an AMC V8 cool is usually more of a challenge than with similar displacement motors. There is some discussion as to coolant and oil flow dynamics of these powerplants.

Jeeps with AMC V8's should have an agressive cooling system. Principles of cooling are found here.

While it would seem intuitive that these engines should be easy conversion candidates into Jeeps, they actually swap only with difficulty and expense into pre-1972 Jeeps. Chrysler-era Jeeps also accept them only with special modifications, and emissions requirements for many jurisdictions prevent these obsolete motors from powering later model vehicles. If comparing swap options, several other engines provide better efficiency, more compact dimensions, greater technological gains, broader parts support and the economy and reliability associated with them.

AMC V8's are often confused with Mopar V8's, especially the 360. These engines are the same in designation only, and share no compatibilities.

It should be noted that the balance characteristics of these engines are all different. They are externally balanced by the flywheel/flexplate and harmonic dampener. Flexplates and flywheels - though they share the same crank flange - must not be interchanged between 304, 360 and 401 versions. 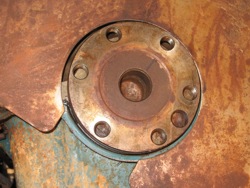 AMC I6 (and V8) engines do not share block bolt patterns with any other engine, including all Willys, Kaiser and Chrysler engines.

Not all AMC crank flange bores are the same. Early motors 1971 and previous - as well as those with automatic transmissions around this era - featured a ~1.8" step (image, right) or a shallow recess instead of a ~1.8" centering bore as found on later AMC V8 engines. This distinction is important to make if adapting to Ford style transmissions or if adapting to GM SM465, or SM420 style transmissions. All early and late cranks (in our documentation) feature a pilot bushing bore that is just over 1" in diameter whether they have the above step-bore, or not.

The AMC V8 is natively and otherwise compatible with several great transmissions. Some popular choices in Jeeps include:

The earliest versions were ambitious motors, but as with most engines in the mid-70' to mid-80's, they were detuned and emissions saddled. The last AMC V8 was produced in 1991 and went into obsolescence with the Grand Wagoneer, having seen no principal improvements in many years.