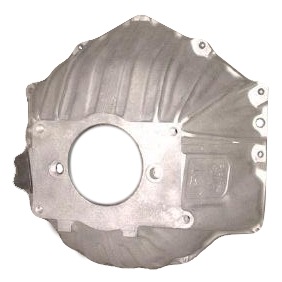 No adapter for the GM engine bellhousing to the Ford transmission is required. With a few simple and cost-saving modifications, 1966 and newer Ford T18 and Ford NP435 transmissions can be used with most GM bellhousings, including full-circle or open-bottom types. Using this method will also allow you in the future to remove the transmission without having to remove the bellhousing like you would with some GM applications. Here is the method:

For the first step the services of a machinist may be recommended. The front bearing retainer from the Ford transmission is removed and simply machined down around the large diameter to where it will be a .005" slip-fit into the bearing retainer hole in the back of the GM bellhousing. Take an accurate measurement (and with the proper tools -- calipers work best) from the hole in the bellhousing before doing this. The small diameter of the Ford bearing retainer is also machined down so it will slip-fit the GM clutch release bearing. Next, the retainer is then shortened by 7/16”. Following this is some fairly straightforward work on the Ford transmission case. 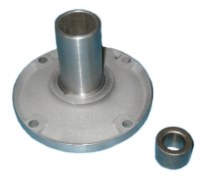 Novak can provide new T18 & T19 front retainers that are already machined to GM dimensions (avaliable below) as discussed in this article. Additionally, the GM crank to Ford transmission pilot bushings are found here.

On the lower front face of the Ford transmission are two ears that, if stock, are undrilled. The lower left ear can be drilled to easily match the hole in the lower left of the GM bellhousing. The right ear can then be drilled. It will not meet up with any hole in the GM bellhousing, so it is necessary that you drill and tap one to match. Use the same size bolt as you do for the other three. If you are not equipped with the tapping tools or the disposition to tap a good, clean set of threads, you may take this to a machinist as well.

If using a GM bellhousing that has a 5-1/8" bore, you will require the following sizing ring:

If the New Process 435 or T19 being used does not have the extra lower undrilled ears on the case it can still be used with a GM belllhousing using the following procedure.

Attach the brackets provided in the Novak kit #F2GM (shown, below) behind the Ford transmission flange. Bolt through the brackets into the GM bellhousing lower holes.

While the above is more involved than using a transmission that has the extra blank ears, it is about the only option available if the transmission does not feature them. 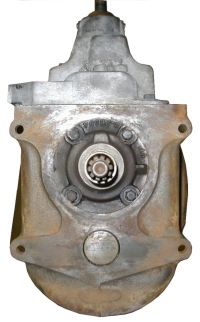 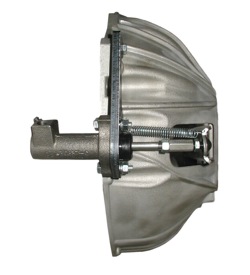