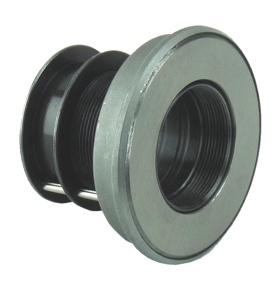 The length of clutch release bearing has the most significant effect on the operation of a clutch of any other factor, and for decades, too many clutch projects have been plagued with set-up problems due to improper bearing lengths.

The problem: pressure plates come in a variety of hat heights, yet it is common for the release bearing that comes with many of today’s clutch kits to be the wrong length for the hat height of the release fingers. This frequently causes tremendous trouble for installers who often end up resorting to compensating with inadequate and even problematic fixes elsewhere in the linkage.

Now, Novak has reinvented the throwout bearing for GM and many AMC Jeep applications. Though other attempts have been made in the past at creating adjustable throwout bearings, they’ve usually been with substandard results.

We set out to design and have achieved the following:

There is no longer a need to predict which length of bearing will best work with your combination of parts, or to purchase and return several models to investigate.

General Motors originally specified and the market once offered a handful of different length bearing options. However, many of these have become unavailable, difficult to find or excessively expensive.

This assembly works on nearly all GM applications that used an external release arm, from 1955-1991 and with an ~1-3/8" transmission input bearing retainer sleeve. In contrast to the many GM bearings once available, 1976-1986 Jeeps only had two lengths of throwout bearings available during this era, making for inflexible setup options, until now.

Previously no adjustability versions existed for this application. This beautiful piece machined from billet allows the same full adjustability as the other bearings in a design that fits 1994 up Jeep applications using this style bearing including the Jeep XJ, YJ and TJ. This should also work with Dodge truck from 1992 up with 238, 318, 360, and 2.5 engines as well as the 4.0L engine from 1993 up. This assembly works on nearly all GM applications that used an external release arm, from 1955-1991 and with an ~1-3/8" transmission input bearing retainer sleeve.

Typically for 1976-1986 Jeep applications or AMC engines that have been retrofit with that style bellhousing and arm.

Has broad application in Jeep, Chrysler and Dodge applications using the AX15 or NV3550 transmission and an external slave assembly starting as early as 1992 is Dodge applications. Of particular interest is the adjustable slave available for this application, see below. The installer will need to test fit and adjust the bearing to best fit their application by lengthening the bearing until 1/8" to 1/16" of air gap is achieved between the release bearing face and the throwout fingers. This method is described in greater detail in our Clutches, Linkages & Bellhousings article.

Once the correct length is determined, we recommend the use of a small bench press to press the lock pins into the housing. Alternatively, they may tap into place with a small hammer. Following their installation, a cutoff wheel or hacksaw can be used to trim them to length. Instructions are included.