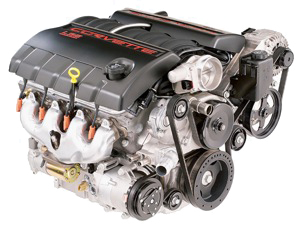 It takes serious guts to replace the most famous engine of all time. Since 1955 GM had been building is Chevrolet Small Block V8 with accolades, respect and awards in the automotive press and racing and with commercial success with customers in marine, industrial and mainstream automotive markets. The Small Block was the most purchased, modified and swapped engine of all time.

The Gen III has now become the predominant swap engine into nearly all Jeep vehicles.

Research into what would become the Gen. III began in 1991. It took engineers two years to conclude that they could extend the life of the classic Small Block with several surrounding technologies (that were eventually rolled into LT and other Small Blocks), but they realized that they would soon hit a wall without an actual fundamental redesign of the flagship GM V8's.

DOHC vs. Pushrod Engines Having decided that the engine would be entirely new, there was said to be discussions and temptations to design the Gen. III to have dual overhead cams - a very popular idea of the era. However this was a significantly more expensive way (in terms of cost and the number of parts) to build an engine and it would have also created a top-heavy and top-wide engine assembly. GM had learned a lesson while developing its LT-5 with Lotus for the Corvette ZR-1. It was a neat motor, but an unnecessarily expensive way to get 405 HP.

Thus, GM engineers accepted the challenge to get all of the broad performance and efficiency out of a single-cam, pushrod and hydraulic lifter engine with two valves per cylinder that other manufacturers were getting out of complex DOHC multi-valve engines.

The eventual result was a phenomenon.The engine profited from the excellent simplicity and elegant engineering built into the design since the inception of the Small Block in 1955. In fact, the motor produces more power more efficiently than multi-cam engines that cost significantly more to build. In terms of engineering, GM Powertrain has added a distinguished feather to their caps.

The introduction of the Gen. III motor in 1997 was actually understated, and it may have been this was so as to not lose the loyal adherents of the original Small Block. It was not until these motors got into the hands of enthusiasts that they began to realize the importance of what GM had done:

Interestingly, the only things to actually carry over from the classic Small Block are the:

The crank featured larger main bearing journals. The connecting rods are made with an innovative new process with powdered metal, forged and then shot-peened. These rods are stronger and more balanced that previous methods would allow.

The intake on the LS1 and subsequent engines is made of a composite, reinforced nylon material. This allows for perfectly equal length and volume intake runners, smoother runner walls and better manufacturing economics over previous cast steel and aluminum styles. Our experience is that the low-profile intakes can swap for the high-profile intakes in the event that hood clearance is an issue (such as with the Jeep XJ Cherokee or other "low-hood" conversions) but that special computer tuning work is required.

In 2001, GM - for the first time since 1955 - changed the crank depth and its pilot bore diameter of the Gen. III. Pilot bushings differ for these motors and transmissions built from this time forward had a deeper bellhousing and different torque converter. 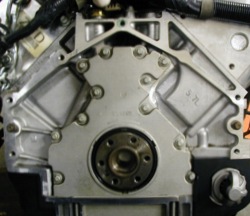 The 5.7L LS1 - the seminal engine for the Gen. III - and it's rear face, which is identical to the classic SBC of fifty years ago. This is just one of many things that makes GM so respected in the conversion world.

Though many technologies carried over from the LT engines, the Gen. III+ motors do not use reverse flow cooling. GM engineers decided that potential hot spots against the cylinder walls was a greater concern than detonation caused by high compression and hot heads.

The Gen. IV engines were introduced in 2004 are very similar to the Gen. III motors, but include a few new technologies; key ones include Active Fuel Management (also called Displacement On Demand) and Variable Valve Timing.

We've assembled a brief list of engines. Some are less preferable for Jeep conversions for obvious cost and horsepower insanity reasons. 4.8L, 5.3L and some 6.0L as sourced from truck/SUV platforms are the most popular and sensible conversions for most Jeeps. 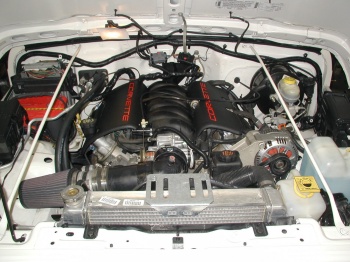 An LS1 in a Jeep TJ Wrangler. Vortec and other Gen. III+ engine installations similar.

5.3L engines are usually only factory available with the flexplate that mates to the 4L60E transmission (a very popular transmission choice of our customers) and these motors were not available with a flywheel. However, 4.8L and 6.0L flywheels do interchange onto the 5.3L as the cranks are of a unified design and all Gen. III motors are internally balanced.

Flywheels and flexplates from Gen. I and Gen. II engines will not and must not be married to any Gen. III+ crank.

As stated earlier, the standard shift Chevrolet bellhousing designs from the previous 50 years will marry to the engine block of these new engines.

The Gen. III / IV engines are compatible with essentially every transmission, manual or automatic, as the Small Block V8. Some popular choices in Jeeps include:

There has been a considerable amount of consolidation within the powertrain divisions of General Motors. Always a fascinating company, GM is the amalgam of several different American car companies. Olds was the original and first company, dating back to 1897. Through the first half of the century, the remaining companies of Buick, Pontiac, Chevrolet, GMC Truck and Cadillac melded and evolved into General Motors.

The interesting dynamic was that of the semi-cooperating / semi-competing style of these divisions with and against each other. Each of these divisions had their strengths in their products and certainly they appealed to the different styles and interests of a broad range of people. Through the seventies and eighties, we see a pronounced increase in the pace of consolidation and elimination of powertrain components, and especially in engines - a trend that was started in the fifties in the transmission divisions of GM.

Today, the engines and transmissions are managed under the GM Powertrain division. The V8’s that came out on top were the Chevrolets. Buick’s V6 dominates cleanly with the 3800 V6, with a close second to Chevrolets V6 for trucks. Cadillac remains somewhat apart. Some would say they are the R&D portion of GM where the more advanced technologies are tested.

The point in this very abbreviated history is that the commonality of these engines makes the swap easier to understand and, as stated earlier, better supported by the aftermarket in parts and knowledge. To boot, the combined knowledge of engines from the different divisions has blended together to create some very outstanding engines.

One is tempted to believe that the gasoline engine has reached its nirvana with the Gen. III+ engines as engineered and built by GM. When considered with the power, cost, package size, fuel efficiency and longevity, these world-class engines can compete with and beat - with flying colors in most cases - essentially any automotive power plant available. The fact that one of these engines can be installed into a Jeep with such success makes the decades-rich tradition of engine swapping more exciting than it has ever been.

This article is only a synopsis and a wealth of information on these engines exists from a multitude of sources. However, to remain germane to our topic, we've kept it brief.