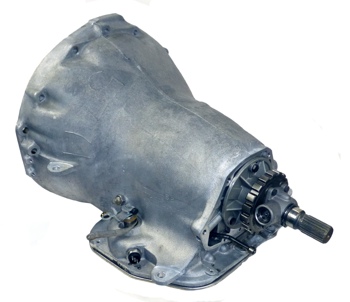 The Chrysler Torqueflite 727 was introduced in 1962 as the replacement to the A-488. For three decades, it was Mopar's flagship automatic transmission, and an important transmission in the history of Chrysler, as well as Jeeps and other car makers.

Chrysler already had a strong history in automatics and a number of innovations to their credit in automatic shifting power transmission design; among which included their push-button shift selectors and other more technical achievements within the gearbox itself.

Nomenclature for the 727 changed late in its life (along with other Mopar autos) to 36RH (3 speeds, 6 torque rating, Rear drive, Hydraulically controlled) and 37RH. 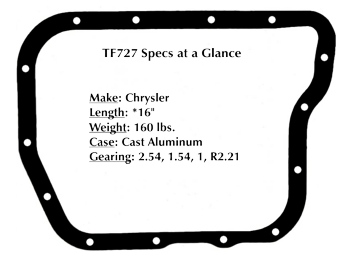 Unlike its iron predecessor, the 727 featured an aluminum case. The 727 was generally intended for small and big-block V8 service, though a version was later made for Chrysler's famous slant-six engine. For the V8 versions, there were two bolt patterns available for this transmission's engine flange: one for the small-block V8's, using an 18" diameter bolt pattern and one for the big-block V8's, using an 18-7/8" bolt pattern. 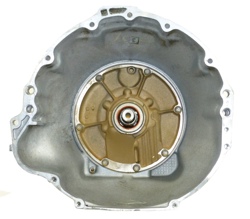 1973 saw a larger filter introduced to curtail possible slow shifting due to fluid starvation from the smaller filters that were more easily plugged.

A lockup torque converter version became available in 1978 - interestingly, a few years before GM and Ford added this functionality to their automatics. This lockup version of the 727 can be identified by its 5/8" input shaft pilot tip, wheras non-lockup versions were splined to the end. This lockup was fully mechanical (instead of electronic, like the later GM lockup automatics), controlled by the speed of the output shaft and engaging only in 3rd gear. These earlier lockups had their bugs to work out, as they'd engage prematurely in some scenarios. Tightening up of the oil pump clearances and changing of the lock-up pressure spring in the valve body were the primary fixes for this, as well as making sure the cooler lines were flowing unrestricted. 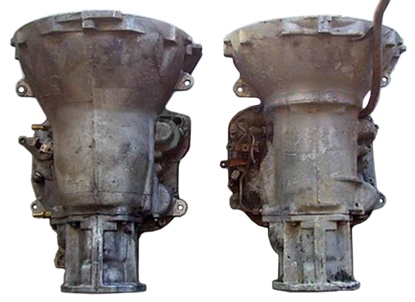 The 727 and 904/999 compared side-by-side. The 999 features a smaller body, a cast belt around the bellhousing-to-case junction. Also notice the large vs. small servo atop the passenger front portion of the valve body.

Models similar to the 727 include the A-904 / 999. This lighter duty model looks similar, though generally smaller in components and overall size. See adjacent image.

While Chrysler had made their 727 available to other marques, International Harvester used them, notably, in their trucks and Scouts from 1972-1981 with the IH 304 & 345 engines. These versions' cases were cast and machined specifically for the IH engines.

AMC actually began using the 727 in their cars in 1972. However, because of their Jeep division's existing contract (stemming from the Kaiser years) with Hydramatic, they continued to use the TH400 until 1979. The 727 featured a dedicated case, cast and machined with the AMC I6 / V8 engine pattern, though the internals and main portion of the case were essentially identical to their Chrysler counterparts. The reader should be aware that the AMC versions of the 727 transmission will not interchange to Mopar engines. The bolt pattern *looks* quite similar, but is not. 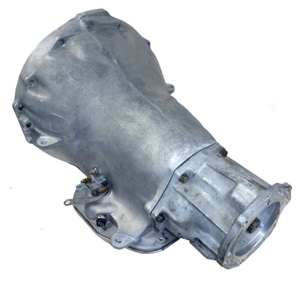 The Jeep version of the TF-727, featuring the factory adapter to the FSJ New Process transfer cases as found in these Jeeps from 1980-1991.

While the 727 main case is numerically short on paper, it is effectively as long as the similar TH350 & TH400, shifting its modulator and parking pawl into the adapter / tailhousing space. The Jeep version is 22-5/8" long.

After well over a decade of Jeep using the Hydramatic 400 transmission against Buick and AMC engines, Jeep let their contract with GM's Hydramatic division expire and they joined the rest of AMC in 1980, making the Torqueflite 727 available in the Full Size Jeeps (J-Trucks and Wagoneer) with AMC I6 and V8 engines. This transmission was called the Torque-Command by Jeep.

The 727 is mechanically compatible with the Jeep/Mopar 4.0L I6 engine, but because the 4.0L requires a crank position sensor normally mounted at the bellhousing, this adaptation gets more complicated. The use of a crank sensor mounted at the front harmonic balancer would be required.

The AMC flanged version of the 727 can be adapted to Chevrolet Small-Block and GM Gen. III+ engines using a plate style adapter and specially designed flexplate. When doing these engine conversions, this allows for the retention of the 727 in FSJ Wagoneers and Trucks, for installers that would rather keep these transmissions, instead of the oft-chosen GM overdrive automatics like the 700R4 and 4L60E. 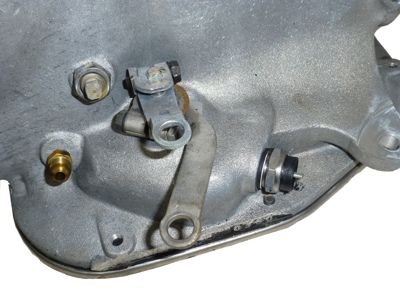 The 727's shifter, featuring the gear selector and kick-down on a common axis. The three-prong switch is for the Park indicator & Reverse lights.

The 727 was often found against the Dodge NP-203 and later, Dodge NP-208 transfer cases, making for a good combo for the tough Dodge 4wd trucks.

727's in IH trucks featured a factory adapter to the IH Dana 20 and, later, IH Dana 300 (having the Dana 20 pattern, unlike the Jeep Dana 300). This version featured a 23 spline output shaft and a corresponding Dana input gear to match. 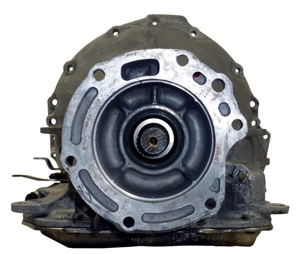 The 727 was only available for Jeeps with the Jeep 208, 219, 228 & 229 and featured a 23 spline output shaft and long adapter, befitting these longer Jeeps. Attempted adaptability into short-wheel-base Jeeps is actually quite difficult. The 727 has unusually large girth and a wide pan, which interferes with the front, passenger-drop driveshaft of narrow-track Jeeps with Dana 20's and Dana 300's. Some have attempted to machine and clock the Dana 300 down to skirt the driveshaft under the transmission pan to avoid this problem, only to find out that it destroys ground clearance, turning the 300 into a boulder-dragger. An AMC TH400 or other GM trans options should be considered here. 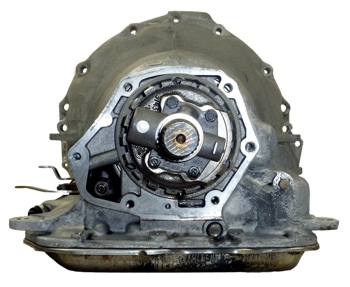 The rear view of a 727 with the adapter / tailhousing removed. Note the parking pawl linkage protruding through the cavity, which operates the pawl built into the factory adapter or tailhousing. 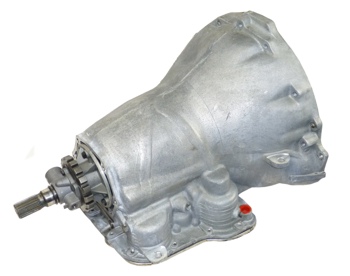 The strength of the 727 is rarely contested. From the factory, they came against engines ranging up to the 426 Hemi. They are unusually strong transmissions, seeing service with hotrodders and heavier truck applications. The duty range of the 727 is often likened to the GM TH400 and Ford C6 automatics.

727's are very stout, but their Achille's heel is any driver that shifts quickly from neutral or reverse into drive. These shifts can destroy the front clutch piston seals, the low-reverse band or even the case. 4x4 enthusiasts contemplating highly technical terrain should be aware of this, as should anyone rapidly shifting to "rock" their way out of a snow bank. 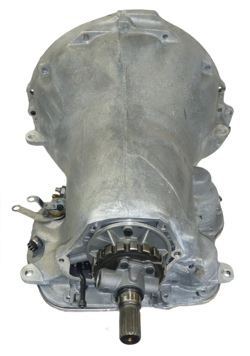 While never short on strength, the 727's are claimed to be less-than-efficient in terms of engine power loss through the trans, much of which gets translated into heat, requiring an adequate transmission cooler. However, 727's can be modified for greater efficiency and reduced heating.