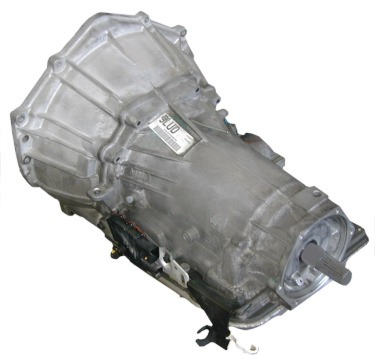 The 4L60-E is an automatic shift, four-speed overdrive, longitudinally positioned transmission. It is now widely considered to be the best rendition of the finest overdrive automatic transmission ever produced.

The Late 4L60-E is most easily identified and differentiated by its removeable bellhousing. It was released in 1996 behind the 4.3L V6 engine. It was released more broadly against the V8 engines in 1997 and was phased into full implementation at GM by 1998 in both RWD car platforms and trucks in both 2wd and 4wd configurations.

Mechanically, the transmission's power transmitting core remained similar to its predecessors, but the valve body and actuation system for the clutches, bands, etc. is controlled by electronic actuators and solenoids. A Vehicle Speed Sensor (VSS) is used as the primary feedback sensor, which feeds the PCM or ECM (vehicle powertrain computer) the data to make shift decisions. The engineering of this system is not regarded as a complication, but an elegant simplification and further improvement to this transmission.

The 4L60-E derives its designation from its specifications: 4-speeds, Longitudinally positioned,6000 lbs. GVW, Electronically controlled, although the transmission sees factory service in trucks up to 8600 lbs.

The strength of the 4L60-E has turned out to be remarkable. Now a darling of the transmission building aftermarket, the 4L60-E is capable of transmitting impressive power from both truck and performance car applications.

The Late 4L60-E transmission has a three piece case of cast aluminum alloy; bellhousing, main case, and tailhousing. GM shortened the package to 21.9" long - equivalent to a manual transmission of 15.4".

The transmission weighs 146 pounds dry, and 162 wet. It requires 8.4 quarts (9.64" torque converter) or 11.4 quarts (11.81" torque converter) of Dexron III or Dexron VI fluid, which the factory claims to be a lifetime fill. Deep pan versions require as much as 14 quarts. Length and volume of the cooling circuit will vary and will require an additional amount.

GM's alternative designations of these transmissions are: In fact, the "E" has now been removed, ostensibly due to the fact that all GM automatics are now electronically controlled and the distinction is no longer useful.

4L70-E transmission is a further improvement still, and share most components. However, these versions have strengthened and improved components for the significant power outputs of GM's impressive line of Gen. III+ engines.The 4L60E was concurrently produced along with its strengthened progenitors; the 4L65-E and the 4L70-E. They share most components and improvements. The 4L65-E was introduced in 2001 as an HD version of the 4L60-E. It has a stronger planetary and a strength-improved output shaft.

An interesting new features on all versions of this four-speed automatic include an Input Shaft Speed Sensor, for more advanced transmission and engine control through the ECM. This sensor is located in the front pump assembly. It was fully implemented in all versions by 2008. Individuals swapping these parts through and across years should be aware of the compatibility issues that this may present.

Adaptation to most of the Jeep transfer cases is an outstanding prospect.

This transmission makes an excellent conversion transmission due to its adaptability into most Jeeps. Both 2wd and 4wd versions of the 4L60-E can be used equally well, and there are no inherent advantages to either one once you have installed our adapter assembly.

The HydraMatic can be adapted to the popular Jeep (and some IH) transfer cases, including the: 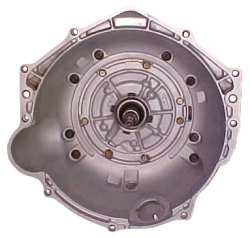 The front face 4L60-E is natively compatible with either the Chevrolet 90 degree “Small Block” & “Big Block” patterned engines (image, left), including the V6, V8 & I6.

Because the transmission is electronically controlled by the PCM and its requisite wiring, it is usually simplest to join the 4L60-E to the engine it came with from the factory. Earlier engines can be joined to the 4L60-E by use of a GM Controller, #12497316. Carbureted engines will require a Throttle Position Sensor. Individuals converting to earlier engines or engines not controlled by a GM PCM should consider the TH700R-4 as the simpler and cost-conscious alternative.

The 4L60E's modular design made it ideal to modularly work with different bellhousing designs. These listed below were predominately for the North American market.

Novak does carry a full line of parts for the 4L60E transmission, including OEM grade and upgrade components for individuals working on their transmissions. If interested, we welcome you to contact us.

Much a part of the transmission is the Powertrain Control Module. GM has scored another hit with this intelligent setup, that puts the engine and transmission under the same management. Standalone transmission controllers do exist on the aftermarket, however it is typically better to run the OBDII / Generation III ) engine and trans as a matched pair.

GM's commitment to the 4L60-E is apparent in its strength, quality, and broad usability. It is hands-down one of the most respectable transmissions of our era, and a very compelling Jeep conversion transmission. The 4L60-E is a very attractive swap option for all Jeeps, with the exception of the CJ5 and other short wheelbased Jeeps - due to powertrain length and driveshaft angle issues. Adaptability to nearly all other Jeeps is exceptional.

please enjoy our video version of this article.