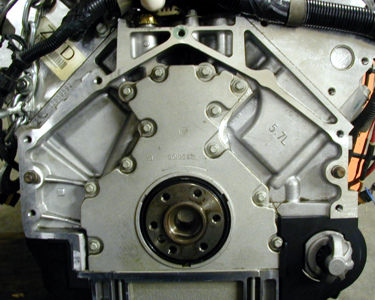 Few engines through automotive history have the same consistency and interchangeability that the Chevrolet Small Block & GM Gen III+ engines have. GM power enthusiasts like us were relieved to find that the GM Gen III engine released in 1997 had essentially the same block bolt pattern at the rear face as the previous Chevy Small Blocks, and the same crank bores for the automatic torque converter pilot journal and the manual pilot bushing area.

However, the crank flange spacing, bolt pattern, pilot bushing bore changes and flexplate / flywheel configurations play importantly into interchange. This guide will help the interested reader through their complexities.

As mentioned above, the block bolt pattern was largely the same, and the locating dowel positions and diameters were fully identical but GM engineers opened up the bolt hole on the LS / Vortec blocks at the 12 o'clock position, as viewed from the rear. Interestingly, this bolt hole had been used on earlier Chevy V8 applications, but had become just a vestigial, untapped boss on these block castings through the latter portion of the Gen I & Gen II era.

With the recommisioning of this bolt hole, GM closed off the bolt hole at the ~1:30 o'clock position in the block. It's generally recognized that there is no significant sacrifice in strength because of it, but many performance powertrain builders do choose to transfer punch, drill and tap this hole for maximum strength, obviously using exceptional care to prevent a crooked tap or excessively deep hole.

Of note, Gen III engines use metric M10 fasteners in place of the original 3/8-16 specification of its predecessors.

Different from their Chevy predecessors, most of the Gen III engines (see chart, below) had a shorter crank flange, offset of about 4/10" closer to the block. This is not an issue when working with original-configuration GM powertrains, but must be addressed when mixing different iterations of GM transmissions. 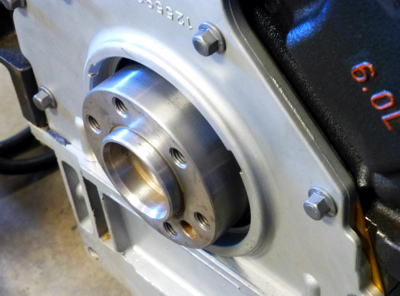 An example of the Early 4.8L and 6.0L extended crank flange, protruding 4/10ths of an inch past the other LS / Vortec engines in the Gen III+ family.

Earlier 4.8L, 5.3L and 5.7L Gen III engines with 4L60E automatics (excepting Corvettes with the remote automatic - these are different animals) and the short crank flange came with a dished flexplate, having its crank flange extending forward and the torque converter flange and ring gear extending rearward. This obviated the need for different (short vs. long nose) starter motors as seen with some other car makers.

The 4L60E for Gen III engines received a thicker torque converter with an extended pilot hub to reach the shorter crank.

Later torque converters have a metric bolt pattern that is slightly smaller on diameter than previous automatics. If you are marrying to a previous generation automatic transmission, your 4L60E flexplate may require that its torque converter holes be elongated outward, which is best done in a mill with a rotary table. 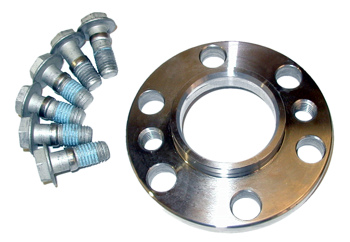 2001+ 6.0L engines with the 4L80E automatic transmission had a short flange and a flat flexplate. But, since there was no change to the front of the 4L80E like for the 4L60E, GM introduced a crank spacer #12563532 and extended length crank flange bolts to keep the flexplate on plane with the starter and the torque converter.

This crank spacer can be used between the crank flange and flexplate or behind the flexplate (other factors depending) to adjust for a shorter flange crank. This spacer and bolts are recommended as a GM Performance part for Gen III+ retrofits to earlier automatics such as the TH350, TH400, and TH700R4 / 4L60 / Early 4L60E. In this scenario, the crank spacer will be used with the dished 4L60E flexplate and the crank spacer installed behind the flexplate to reach and provide precision center indexing of the torque converters found on these earlier automatics.

In the case of the 4L60E automatic transmissions, GM compensated for these shorter Gen III cranks at the factory by providing a dished flexplate instead of a flat one. In the case of the 4L80E transmission, GM added a crank spacer and longer bolts to use with the flat flexplate supplied. Either of these strategies position the ring gear in the plane of the starter motor gear and provide the proper spacing necessary to meet the torque converter drive pads. 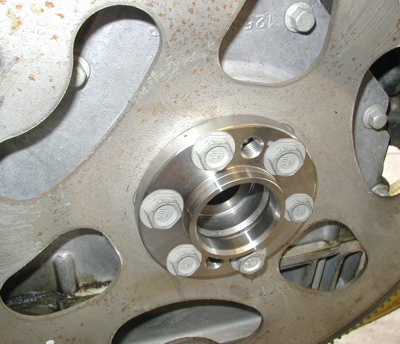 This is an example of the crank spacer installed on an engine with the short crank flange, and behind a dished flexplate.

In 2001, GM updated their crank bore design on the V8 as well as the V6, eliminating the smaller, ~1" diameter pilot bushing bore (featured on Chevy engines since at least the 1940's) by extending forward the depth of the larger, 1.7" automatic torque converter pilot bore. For this reason, we offer pilot bushings for both the earlier and later style designs and installers of 1997-2000 Gen III engines with manual transmissions will usually choose a Gen I style pilot bushing.

On early 4.8L & 6.0L engines with the extended crank and a manual transmission, the factory flywheel had a relatively flat crank flange so as to position the ring gear and flywheel clutch face at the right depth for the clutch assembly.

Later 4.8L and 6.0L engines with the short crank and a manual transmission came with a factory flywheel with a recessed crank flange which extended the ring gear and flywheel clutch face rearward. However, this flywheel is not ideal for earlier transmission swaps like the SM465, AX15 and many other 10-spline transmissions and their clutches in that over 20% of the clutch face is not contacted by the face of the flywheel. 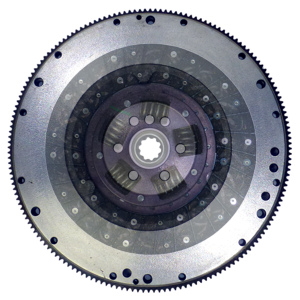 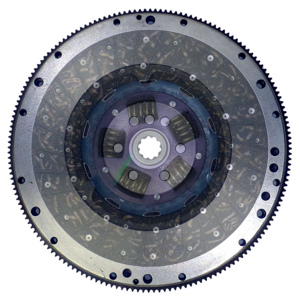 This is the OE flywheel with a 12" disc, with about 80% of its friction area contacting. 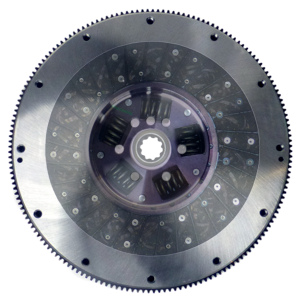 This is the aftermarket flywheel with a 10-1/2" disc, with 100% of its friction area contacting. 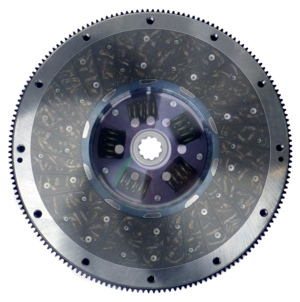 This is the aftermarket flywheel with a 12 " disc, with 100% of its friction area contacting.

Now, one could install the earlier OEM style flywheel with a crank spacer between it, but because of GM's use of a proprietary thread specification, there is not a known set of bolts long enough for adequate thread engagement for this stack-up.

The best solution here is to use the aftermarket flywheel and 12" classic GM clutch assembly for the maximum holding power, ease and future parts interchangeability.