The Novak Guide to Installing

Small Block Ford V8 engines are the 260, 289, 302, and 351 cubic inch engines. These Ford V8 engines are lighter and narrower than the Chevy V8 engines, however they are about 1.5" longer than the Chevy V8. This extra length presents a problem when doing a conversion on an 80" or 81" wheelbase Jeep. It should be noted that the 351 CID Small Block Ford V8 is longer than other Ford engines of the Small Block series. This extra length indicates the necessity of firewall modifications on short wheelbase Jeeps when using the 351 CID engine. Radiator clearance is a problem on Ford swaps in 80" and 81" wheelbase Jeeps. Our experience has shown the Ford V8 to be more a more involved and difficult swap than that of a Chevy V8 in many earlier Jeeps. However, they make very good conversion powerplants 1972 and later Jeeps, as the engine bays became longer to hold the AMC I6 and V8 engines.

The Ford Small Block installs with some difficulty into pre-1972 Jeeps, due to the length of the engine. Because it is higly unkosher to cut the firewall, you will need to remove the grille shroud entirely in addition to removing and replacing the front crossmember. An advantage, however, to these installations is the narrow nature of the Small Block. This offers good clearance between steering components. Note that you will want to offset the engine about 1" to the driver's side. This will facilitate the rest of the installation. Our #MMX engine mounts offer this useful capability.

Be careful choosing a carburetor/fuel injection manifold and air cleaner assembly when working with a low-hood (CJ3 and earler) CJ Jeep. Later high-hood Jeeps like the CJ-3B and later versions have ample clearance.

We encourage you to choose a Ford transmission for your conversion. Both the Ford T18 and theFord NP435 make great conversion transmissions. They adapt well to the Jeep Dana Model 18 transfer case using our #188 Series kits, or our #432 Series kits, respectively. We do not offer an adapter assembly to retain the original T90 three-speed.

Driveshaft modifications will be required in nearly every situation. 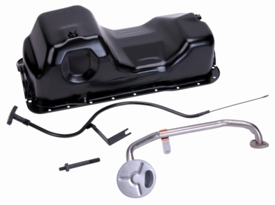 The oil pan sump location should be considered when choosing any of these Ford V8 engines. Most of them have front sumps that cause front differential clearance problems. The 289 and 302 engines can be fitted with a rear sump oil pan and pump pickup from a Bronco or ‘83-‘93 Mustang 5.0 engine. We have also learned that the 351 Windsor (and 351 Windsor HO versions) engines, as found in the full-size Broncos, featured rear sump pans as well.

We've also heard from our customers that the oil pan off later model Explorers with the 5.0 has the correct configuration. 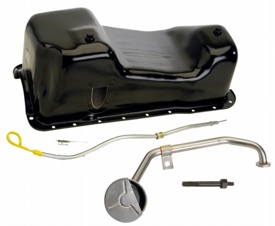 There are two completely different block bolt patterns used on the Ford small block V8s. The first small blocks were the 260 cubic inch engines in 1962-64 and the 289 c.i. in 1963-65. These engines are usually referred to as "5-bolt" engines because they had five bolts attaching the bellhousing to the block. 5-bolt engines have a transmission bolt pattern that measures about 6-1/4" wide by 7-1/2" tall and have a 4.687" bore in the bellhousing.

The modern incarnations of these motors are quite good. Fuel injection versions through 1996 are good to work with and readily available. The 1996 351 was the only OBDII compatible version of the Ford Small Block ever made, and can be swapped into these Jeeps.

Because the front cross member must be relocated it is strongly recommended that the Jeep be converted to Chevy Saginaw steering in conjunction with the engine swap. lt will be about the same amount of work to relocate the stock steering components on the new cross member as it would be to install a Chevy steering setup. All 1972 and newer Jeeps use GM Saginaw steering. The best thing to do is to inspect one of these vehicles to see how Jeep did it.

The rear cross member will remain in the original fore and aft location on Utility and J series vehicles. On the CJ type vehicles, additional firewall to cylinder head clearance may be obtained by dimpling the firewall in the area of the heads. It has been noted that on CJ type vehicles many of the 6-bolt style bellhousings have a protruding corner on the drivers side that will hit the brake master cylinder. The simple way to overcome this problem is to move the entire engine, gearbox assembly and rear cross member towards the passenger side 1". This is much easier than relocating the master cylinder. On 1972 and newer CJs the engine can be moved forward as required.

On "low hood" Jeeps it will be necessary to modify the hood for air cleaner clearance. This will depend on the model of carburetor used, as well as air cleaner type, and can sometimes be avoided with a mild body lift. The CJ3B, CJ5, CJ6 and M38A1 have ample hood clearance, as do Utility and J Series Wagons and Trucks.

If the Jeep had the battery mounted on the frame, remove the mounting bracket. The battery can be mounted on the firewall of CJ3B, CJ5 CJ6, M38A1, Utility and J series wagons and trucks by using a late CJ5 firewall type battery bracket. If the Jeep is a "low hood," the battery is best mounted inside in a battery box of the type used in boats. These hold up quite well and will have the added benefit of protecting passengers and gear from possible contact with battery acid.

Assuming you have obtained an engine with standard shift parts, remove the bellhousing, clutch and pilot bushing. Install the special pilot bushing supplied with your conversion kit, being careful not to damage the bushing or "cock" it on installation. The pilot bushing is an important part, supporting the end of the main drive (input) gear. Replace the Ford clutch disc with a Chevy or Jeep V6 clutch disc. These discs will work with the Ford pressure plate. There are two basic styles of clutch hub used in GM discs of any given diameter. On one type, the hub protrudes out away from the engine. This is the type that must be used. The hub protrudes in towards the engine on the other style and this will not allow sufficient engagement of the splines on the clutch gear. Because of the spring center, the clutch disc cannot be turned around as the springs will hit the flywheel bolts. The reason for using the GM disc in the Ford clutch is because there is no gear available for the Jeep transmission that matches the Ford hub splines. Ford uses a number of different clutch release arms and all are too long to be compatible with the amount of travel available from the Jeep clutch linkage. Additional clutch information will be found here.

On 6-bolt engines that require movement towards the passenger side this type of modification is not recommended due to the decrease in oil capacity. 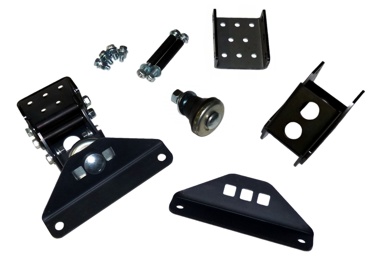 The Ford motor mounts manufactured by Novak (part #MMX-NF1), right, are installed on the engine to replace the original Ford cushions. These brackets completely replace the original Ford mounts. The gusseted frame brackets weld to the inside faces of the frame rails and support the weight of the engine through the neoprene insulator. The other insulator fits under the frame bracket to effectively dampen engine vibrations without being too soft. Refer to our instructions supplied with motor mounts for more information.

Clutch linkage may be hydraulic or mechanical. Mechanical linkage is simpler to connect as the stock linkage is used "as is" except for changing the length of the release arm to pivot tube cable or replacing the cable with a rod and clevis of proper length to attach to the modified release arm.

If the engine, gearbox, cross member assembly was moved over, adjustments to the position of the clutch pivot tube will be required. As for other conversions, the hydraulic linkage system can be used. Refer to our clutch guide, here.

The throttle linkage is connected up using a late Ford, Chevy or Jeep cable setup. 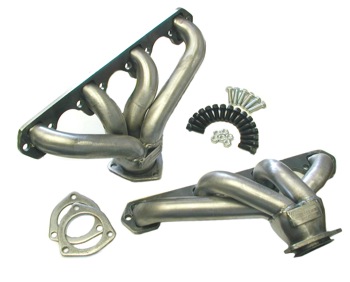 Many of the passenger car exhaust manifold outlets face nearly straight back and require an extremely sharp bend in the headpipes to clear the floorboards and transfer case.

While there are a number of radiators that will work from a few hours shopping in a wrecking yard, the most effective and simplest is to use a modern aluminum conversion radiator. See our Guide to Cooling for more information.

These conversion procedures described are recommended and will apply to all Jeep vehicles with variations as follows:

IMPORTANT: Refer to our general information regarding bellhousing alignment, clutch, and cooling, which are relative to all engine swaps.