The Chevrolet I6 Engine

The Chevrolet I6 was released as the 194 CID in 1962, and was essentially the replacement for the previous generation I6 (216, 235, 261). This newer I6 featured the classic Chevy V8 rear face bolt pattern, making it compatible with all of the transmissions - manual or automatic - that were available for the more common V8. This new I6 had a strong, but lightweight engine block casting and was considered to be a progressive design upon its release. Of course, Chevrolet had plenty of experience building straight-six engines, as they could trace their successful designs back to the 1929 "Stovebolt" Six, though the new engine series had little in common with the older powerplant.

How to Install Chevy Engines in Jeep Vehicles

This new I6 engine was enlarged to 230 CID in 1963, and would persist at this displacement until 1969. It was largely found in trucks, but also available in Camaros, Chevelles, El Caminos, etc. In 1966 this engine grew to 250 CID (designated "LE3") and would last clear until 1984, primarily in Chevy / GM truck platforms as well as some cars.

The engine's largest factory displacement was 292 CID, which was released as early as 1964. This engine would see production clear until 1990. Horsepower was ranked as high as 215 HP with 215 ft/lbs of torque. 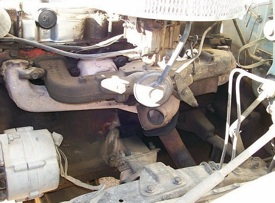 The Chevy I6 featured driver's and passenger's side, 45 degree mount brackets that allowed it to emulate the V8 mounting system, for easier assembly and parts interchange at GM. These brackets are compatible with Novak's #MMX engine mounts listed for the Chevy Gen. I engines.

We recommend that you get Leo Santucci's Chevrolet Inline Six-Cylinder Power Manual, ISBN #1931128154 for further reading and research. GM was without a truck grade I6 from 1991-2001, but remedied that with serious style when they released their powerful Atlas series engines in 2002.

The Chevy I6 has the same bellhousing and clutch parts interchange as the Small Block V8. Refer to this article for this information.

All versions of the Chevy / GM I6 were well known for oustanding longevity and reliable power. The Chevy I6 is often compared with the Ford 300 and the Jeep 258, as these represent the mainstream American I6's of their era.