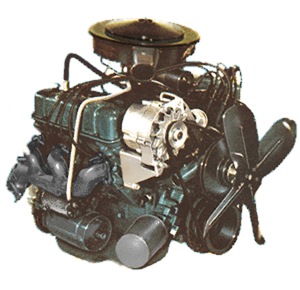 The Buick V6 started its production life in the 1962 Buick Special. It was a 90 degree engine and its first displacement was 198 CID. It was dubbed the "Fireball".

Buick had worked with the innovative 215 aluminum block V8 (later to be an Olds, then ultimately a Rover engine), but it was difficult to build and had its quirks. Buick set its sights on the iron block Fireball, derived from the 215 V8. However, it did not share engine block bolt patterns or engine mount bolt patterns.

Because the V6 was essentially a shortened V8, the engine had a unique odd-fire design - so called because of the unevenly spaced (at 90-150-90-etc.) firing impulses of this engine. This is the source of the characteristic and well-liked rumble.

Displacement was increased to 225 CID in 1963 to match the bore size of the similar 340 CID Buick V8 (which later became the Buick 350). The V6's performance was pretty impressive. However, Buicks were heavy cars and the horespower wars were on.

Production Jeeps get the V6

The V6 tooling was sold to Kaiser-Jeep and they were introduced as the "Dauntless V6" into the Jeep CJ5, CJ6 & C101 for the 1966 model year with warm customer reception. The 225 Buick V6 was offered as an option over 4 cylinder engine in 1966-1971 CJ5 and CJ6. Jeep used a heavier flywheel for increased torque and to dampen the vibrations stemming from the odd-fire design.

An interesting note about the Jeeps and Buick V6's is drawn from the story of Hayes Brothers Jeep in Salt Lake City. Hayes began installing several crate V6's into new Jeeps. In time, Jeep took notice and sent a development team to Utah to see the conversion process, which included the removal of the 134 c.i. engine, the installation of the engine mounts and a bellhousing to T90 transmission adapter.

The engineers drove one of the Jeeps up into one of the Salt Lake valley canyons and charged up one of the flanks. They were impressed. In 1966, the Buick 225 Dauntless V6 became the horsepower option, finally pushing the Jeep into the muscle era. The 1966-71 225 CID was optional in CJ5's of those years.

These were great years for the CJ's. Power was ample at 160 HP and 235 ft. lbs. of torque, and the Buick motor offered a broad torque and horsepower curve.

The T90 transmission was never used with the Buick V6, but instead used a T86 or T14 three-speed transmissions.

The Buick V6 was sadly shelved by AMC motors. They lengthened the nose of the Jeep CJ5 by 3" (a move that irritated off-road enthusiasts who appreciated the superior trail vision offered by the shorter hood) and installed their own 232 I6. This was a decent motor, but at 2/3 the power it was arguably less exciting than the rambunctious V6.

GM offered to purchase back the V6 rights and tooling from AMC in 1974. The 225 V6 Buick was then reintroduced by GM in 1975 with a .050 larger bore that increased its displacement to 231 CID; this done to match the 350 V8's bore size, so the V6's could again be produced along-side the Buick 350 V8, sharing many common parts, including pistons.

This newer version was still an odd-fire engine but had the Delco HEI electronic distributor. In mid-1977 the 231 was converted to "even-fire" (120 degree spaced firing impulses) by changing the crankshaft, camshaft, distributor and (presumably for increased volumetric efficiency) the cylinder heads and intake manifold. As such, interchange of these parts with earlier V6's ranges from problematic to impossible.

In mid-1977 the 231 got a different crankshaft, camshaft, distributor and flywheel, which made it an "even-fire" engine. This became the 231 and similar 252 V6, the latter having a longer stroke. 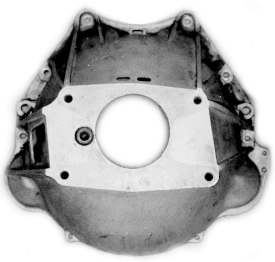 The classic Buick (and Olds and Pontiac) bellhousing.

GM made a variation of the conventional RWD 3.8L for front-wheel-drive cars from 1984 through 1988. These versions have the engine mounts in different locations and are not easily used for conversion engines into Jeeps.

The 3800 engine is related to the 90 Degree V6 in certain concepts and technologies only - Buick engineers taking what they had learned about the V6 and incorporating it into an entirely new design of engine. The 3800 went on to become one of the most respected and acclaimed engines in American automotive history.

How to Install the Buick V6 into Jeep Vehicles

Chevy also makes a Small Block V6 and these have a rear mounted distributor like the V8s. Buick built V6s have the distributor at the drivers side front of the engine.

The 1961-63 198 CID engines should be avoided as no parts from 1964 and newer engines interchange. Additionally, the difficulty in finding parts for these should deter one from making this choice.

If using a 1982 or newer V6, you will have to use the 1977-81 carburetor to make the engine run correctly without the computer. If you have a 1975-77 odd-fire 231, you can use the regular point type distributor from the earlier 225 V6 in place of the self-contained unit, if desired. The HEI unit is better and there is little reason to not use it. 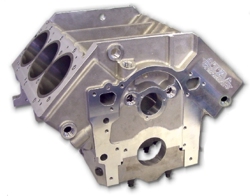 Now, this is neat! A Buick V6 block in aluminum. TA Performance is the inspired supplier.

All 225 and 231 odd- and even-fire V6s use the same bellhousings with slight differences that would not prevent interchange. For that matter, many Buick, Olds and Pontiac V8 bellhousings will fit this engine. It should be mentioned here that Chevy V8 Bellhousings will not fit these engines. Engines made by Chevy have their own engine to bellhousing bolt pattern and while they interchange widely on Chevy engines, they will not fit other engines in the GM family. As in the Chevy bellhousings, there are some late Buick bellhousings that have the rotated transmission bolt pattern and "backwards acting" release fork and these should not be used for a Jeep conversion.

Flywheels for 225 and 231 odd fire engines will interchange. The 225's have heavy flywheels (about 50 pounds) and have special balance characteristics for the odd fire engine. 225 Flywheels are drilled for 10-1/2" clutch when this engine was used as an optional engine in 1966-71 CJ5/CJ6. The Buick and Olds 225's used a 9-1/2" clutch, as did the 1975-77 odd fire 231's. The 231 even fire V6 uses a differently balanced flywheel from the odd fire engines though both are externally balanced. Both odd and even fire Flywheels have 160 tooth ring gear and use the same starter motor but the flywheels are interchangeable only if specially balanced to the engine's rotating assembly by an experienced automotive machine shop.

Exhaust manifolds will interchange across the line of Buick 90 degree V6's. To facilitate some conversions, we offer a set of headers that work well for many installations. Contact us for more information.

The most common cars from which to extract the Buick V6 are all Rear Wheel Drive models, including:

If you think the idea of a performance, aluminum block Buick V6, a very excellent resource is available at TA Performance.

A very useful website and discussion group to visit is the EarlyCJ5 Board. A variety of projects are discussed and often published that can benefit your build-up and maintenance of these excellent motors in these great Jeeps. We specifically recommend this article.

These Buick V6's have some great benefits. Though usually adequate in their stock form, they can be built for excellent torque and outstanding horsepower. These V6's typically work best in Jeeps weighing less than 3,000 pounds.