Different pressure plates have different ratios, as do the various linkage systems that are native to Jeeps. The following clutch release arms are available to help you get the right amount of travel from your GM engine's clutch in your Jeep.

This release arm is the best choice of release arm for a GM engine swap in 1945-1971 CJ models. It's proper length gives the correct release action for GM clutches, and is compatible with the early bellcrank linkage systems found in these earlier Jeeps.

This release arm is the best choice of release arm for either a GM engine swap in 1972-1986 CJ models, and some FSJ Jeeps - with the factory mechanical release system (not hydraulic). It's proper length gives the correct release action for GM clutches and is compatible with later rod & bellcrank linkage systems found in these Jeeps. This release arm is primarily for GM hydraulic release applications. It is the proper length to give the correct release action with hydraulic linkage systems found in Jeeps YJ, XJ and TJ Jeeps when performing a GM engine and bellhousing conversion, or on some earlier Jeeps that may have a custom made hydraulic system. A modified version of this arm is used in our GM Hydraulic Slave kits HCRC & HCRB. For GM stock and retrofit applications as needed and described above with each arm.

While sometimes not needed in this application, it is priceless when clearances dictate its use. With all the variabilities in flywheel and clutch height, we highly recommend its use. Further information is here. 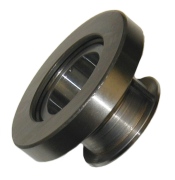 Installation varies with the application. The arms will install as stock arms do and the linkage will need to be modified to provide correct movement at the release bearing.

We strongly recommend that the installer read our Guide to Clutches, Linkages & Bellhousings, to best understand the above arms and the clutch system, generally. Throws and clearances are discussed there and adherence to those methods will yield a successful installation.